Welcome to the Wilkinson County Assessors

The information contained herein reflects the values established in the “most current published” tax digest. *Please note that the Assessors Office establishes values only. The Wilkinson County Tax Commissioner should be contacted with tax bill related questions.

Did you know?
Wilkinson County, the 29th county formed in Georgia, was created in 1803. The county was named for General James Wilkinson, an officer of the Revolutionary War and native of Maryland. 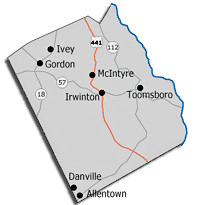 Irwinton was named for Georgia governor Jared Irwin. Gordon was named for the first president of the Central Georgia Railroad, William Washington Gordon (for whom Gordon County is also named). Allentown is situated at the junction of four counties: Wilkinson, Twiggs, Laurens and Bleckley.

Wilkinson County has substantial kaolin deposits, which are important to the local economy.

Wilkinson County shares the Beaver Dam Wildlife area with Laurens County to the southeast. This was once a Wildlife Management Area owned and operated by the Department of Natural Resources, but now is privately owned. The Oconee River forms the county’s eastern border.

Several interesting attractions include the Swampland Opera House in Toomsboro, and Beaver Creek at Ivy Station, which has a restored caboose, a cane mill and Civil War memorabilia. The Gordon Depot in Gordon, GA has recently been restored and has a museum filled with railroad and County history. More that 500 acres along the Oconee River at Ball’s Ferry were recently set aside for the Ball’s Ferry Historical State Park.
Source: georgia.gov