The goal of the Thomas County Assessors Office is to provide the people of Thomas County with a web site that is easy to use. You can search our site for a wealth of information on any property in Thomas County.

The information contained herein reflects the values established in the “most current published” tax digest. *Please note that the Assessors Office establishes values only. The Thomas County Tax Commissioner should be contacted with tax bill related questions. 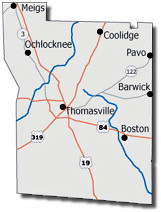 All members of the appraisal staff visiting your property will display Thomas County identification with a photo, and will drive marked county vehicles.
Georgia law requires that property be valued at Fair Market Value and uniformly. The Assessment Value for Georgia is 40% of the Fair Market Value. If the Sales Ratio (assessed Value ÷ Sales Price) is between 36% and 44%, then the ratio is acceptable to the Georgia Department of Revenue. The Thomas County Sales Ratio was confirmed by State Auditors for tax years 2008, 2009 and 2010.

After analyzing the 2009 and 2010 sales for residential, agricultural, industrial, commercial and vacant land properties, the Thomas County Board of Tax Assessors has made adjustments to the Fair Market Value of Thomas County properties in order to be within the 36%-44% acceptable Sales Ratio range for 2011.

Some advantages of continuing to maintain current assessments are: