Welcome to the Lee County Assessors

The goal of the Lee County Assessors Office is to provide the people of Lee County with a web site that is easy to use. You can search our site for a wealth of information on any property in Lee County.

The information contained herein reflects the values established in the “most current published” tax digest. *Please note that the Assessors Office establishes values only. The Lee County Tax Commissioner should be contacted with tax bill related questions.

Did you know?
Lee County was one of the original landlot counties acquired from the Creek Indians by a treaty in 1825. Georgia’s 68th county, it was named for Richard Henry “Lighthorse Harry” Lee, father of Confederate General Robert E. Lee. Lighthorse Harry gave the eulogy at the funeral of George Washington in 1779.

The original county seat was Starkville, but was moved to current county seat of Leesburg in 1876 after the completion of the Railroad from Americus to Albany in 1857. Smithville, in northern Lee County, is the only other incorporated city in the county. 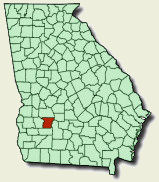