Welcome to the Houston County Assessors

The goal of the Houston County Assessors Office is to provide the people of Houston County with a web site that is informative and easy to use. You can search our site for a wealth of information on any property in Houston County.

The current values contained herein reflect “values under construction” and not yet approved by the Board of Tax Assessors. The previous value is the value shown on the last certified tax digest. *Please note that the Assessors Office establishes values only. The Houston County Tax Commissioner should be contacted with tax bill related questions or visit http://www.houstoncountyga.org. 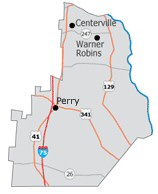 Houston County (pronounced House-ton), the 51st county formed in Georgia, was created in 1821. Originally part of the Creek nation’s land, the county was named for John Houston, a member of the Continental Congress and Governor of Georgia from 1778 to 1784.

Perry is named in honor of Oliver Hazard Perry, the naval officer who said “We have met the enemy and they are ours,” after a fleet under his command defeated the British at Lake Erie.

Robins Air Force Base, the center of the Warner Robins Air Material Area, was built in 1941 for around $15 million.

Warner Robins is home to one of the top Air Museums in the country, the Museum of Aviation. This facility also includes the Georgia Aviation Hall of Fame as well as the Robert L. Scott Vistascope Theater.